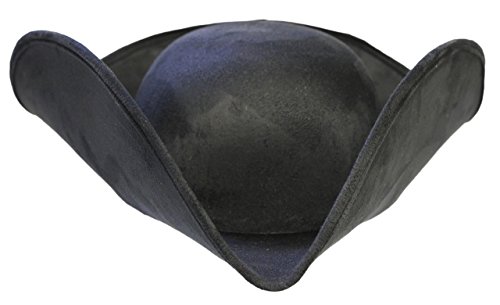 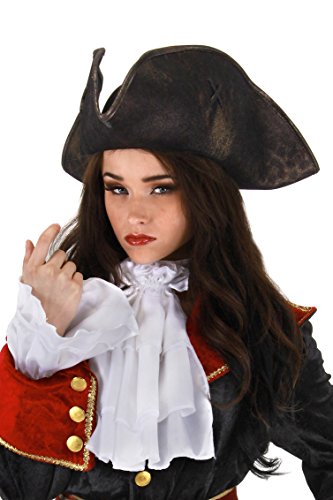 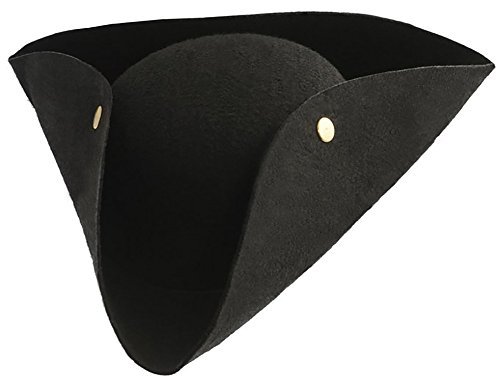 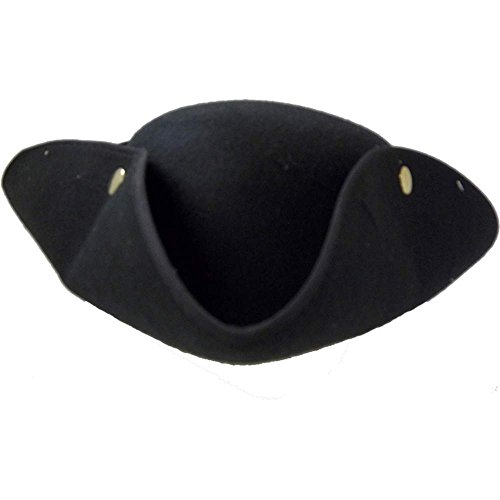 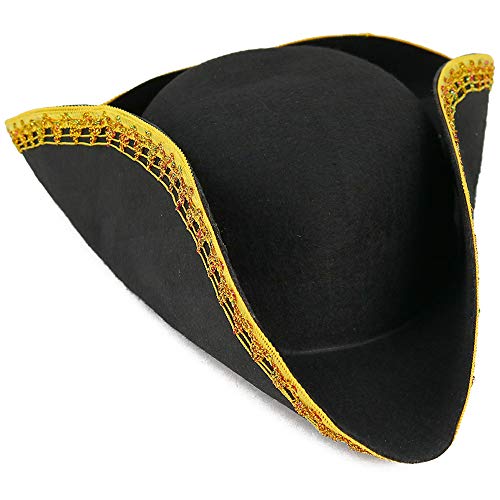 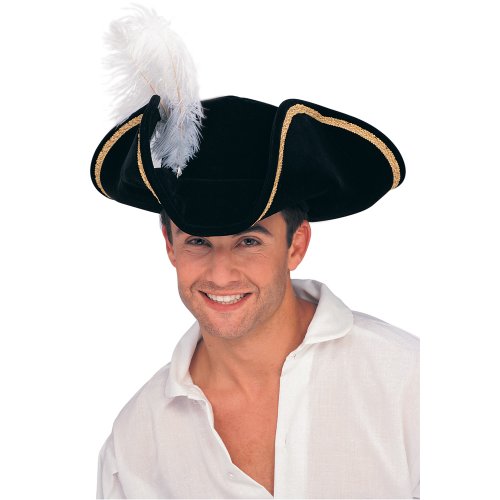 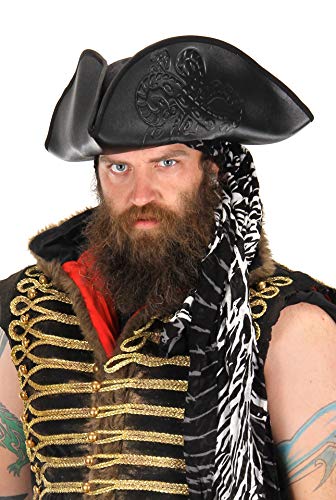 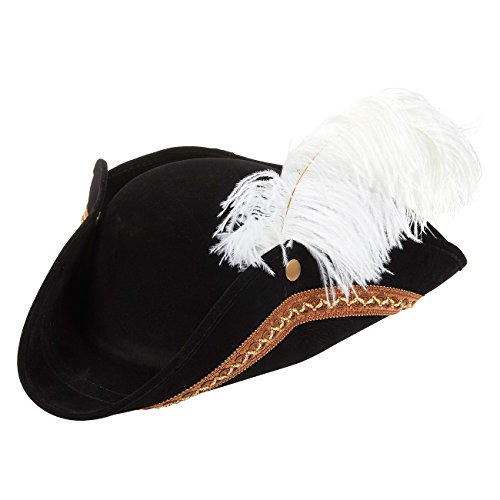 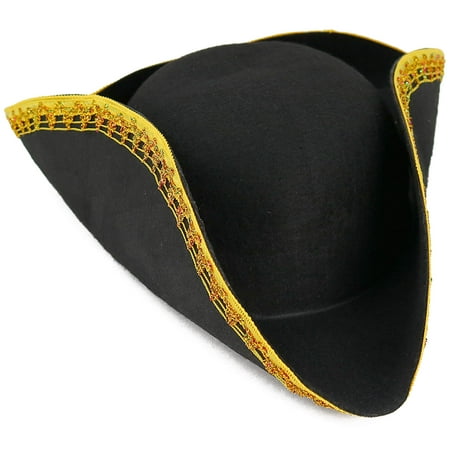 Skeleteen Triangle Colonial Hat is the perfect hat for any adult or child dressing up in Colonial times. It can be used for Colonial Day at school, a birthday party, or a favorite Historical Character if used for a costume of George Washington, Thomas Jefferson, Alexander Hamilton, Samuel Adams, Benjamin Franklin, Paul Revere, John Hancock, Patrick Henry, or any other of the Founding Fathers. This hat is made of durable felt and has cool gold trimming to complete the colonial look. The cap is big enough to fit most sizes heads and is made to fit even while wearing a wig underneath. It is perfect to wear for a costume of a patriot from the colony. It can also be used for general or soldier costumes from the Revolutionary War. The style of this hat is most appealing to children and they will love it as a cosplay item. This hat can also be used for a pirate costume because pirates in those days also wore tri cornered hats. However, this particular style was most worn by the Colonials, or the British and French. Therefore, to complete the costume you would need a white ponytail wig, a double breasted frock with brass buttons, white pants and shoes with a square buckle. This hat is also an amazing gift for any kid, especially a boy, who is learning about American History or the presidents and loves dressing the part.

Skeleteen Tricorne Felt Hat is ideal for boys, girls, men and women dressing up in the colonial era.These gold trimmed hats are made of felt and measure 13" x 13", with a cap size that fits most.This hat is ideal for use in a classroom costume box or a reenactment of the American Revolution.It's the perfect hat to wear to a costume birthday party with a George Washington or colonial theme.Skeleteen items are made of tested materials that are non-toxic and safe. 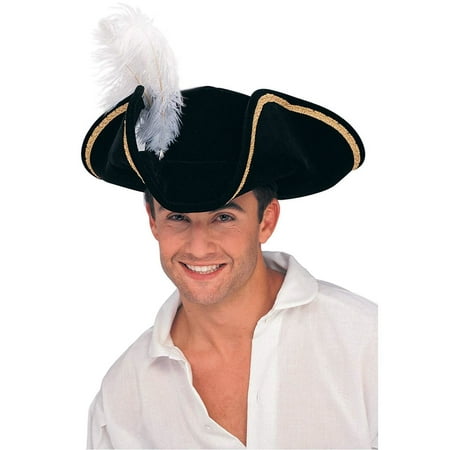 Soar into the holidays with the Gold Angel Wings. You?ll feel heavenly sporting wings that look downright divine. This product is made from Polyester. It makes a great addition to any angel costume. Celebrate the Holidays by turning yourself into an angelic looking cherub this season. 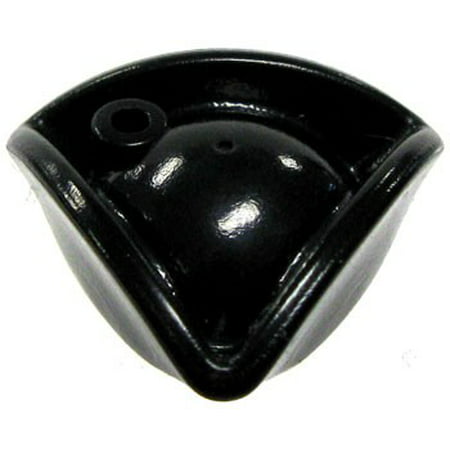 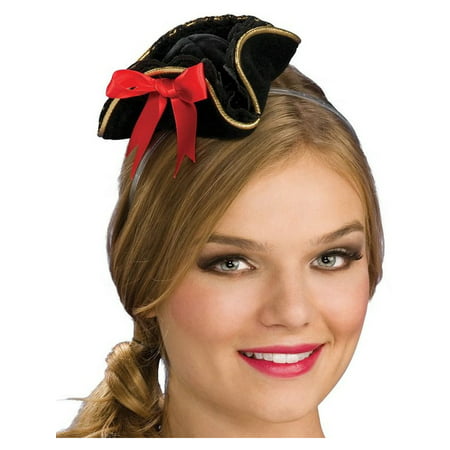 These black mini pirate tricorn hats from Rubies can add a sexy and sophisticated flair to any swashbuckler or pirate themed costume! Made of polyester with structured backing and ribbon bows, these are a cute little item for any sexy pirates or land lubbers. Great on their own, even better with the other Halloween Costumes and accessories in our store!

Available in Sizes: Standard - One SizeItem Includes: A Black Tri-Corn Hat Trimmed In WhitePictured items not included: CostumeMaterial: 100% Synthetic FiberCare Instructions: Do Not Use Heated Styling Tools As This Will Damage Synthetic Fiber. 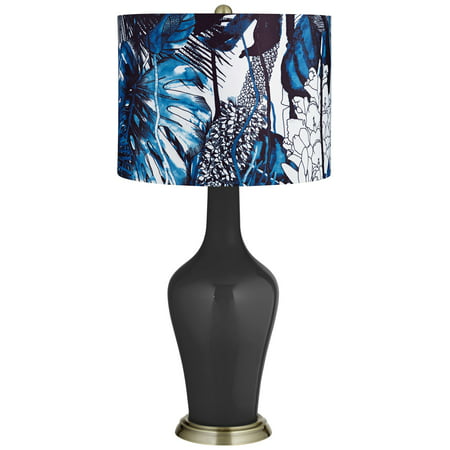 Refresh your home with the fresh, designer color of this glass table lamp from our Color + Plus™ lighting collection. The lamp is hand-crafted and made-to-order by experienced artisans in our California workshops, and features a beautiful Tricorn Black color. It rests securely on an antique brass finish metal base, and is topped with a designer blue leaf hardback drum shade. Lamp base U.S. Patent # 8,899,798. 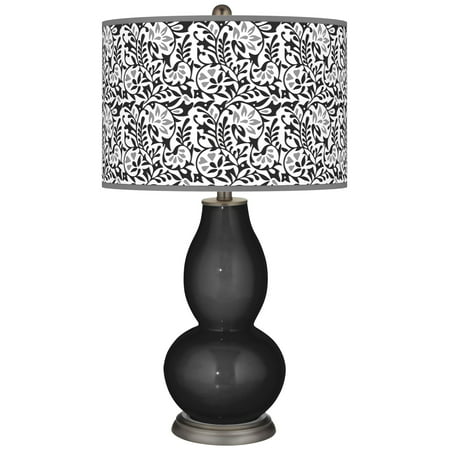 This double gourd glass table lamp from the Color + Plus™ collection offers a brilliant color accent for your home decor. The designer Tricorn Black base is hand-crafted by our experienced artisans in California, and is topped by a custom-made lamp shade. The shade features an exclusive Gardenia pattern and is printed to order. Shade process U.S. Patent # 7,347,593. Lamp base U.S. Patent # 8,899,798.